The town of Hryców by the Chomor river, a tributary to Słucza, used to be part of the allodial properties of the Ostrogski princes. However, in 1605 the properties were already held by prince Janusz Zbaraski. The were transferred from his heirs to the Lubomirski family. Stanisław Lubomirski, Lord High Steward of the Crown, sold Hryców with all adjoining properties in 1752 to Michał from Grabów Grocholski – coat of arms Syrokomla (b. 1704), district judge of the Bracław voivodeship, married to Anna Radzimińska. Michał’s heir was his son Marcin (1727 – 1807), voivode of Bracław, married to Cecylia Myszka-Chołoniewska, who in turn handed over Hryców to the youngest of his five sons – Ludwik (1784 – 1869), married to Maria née Baworowska. The next heir of the Hryców keystone was Ludwik’s only son, Mieczysław Grocholski (1812 – 1899), married to Stefania Giżycka, family crest Gozdawa. After the death of Mieczysław, the properties already considerably reduced by various dowries, fell to Włodzimierz Grocholski (1857 – 1914), deputy to the Russian Duma (parliament), the younger of his two sons. The older son, Stefan (1850 – 1911) settled in Kołodno, the property of his wife Olga née Świejkowska. Since Włodzimierz Grocholski was unmarried at the time of his death, his nephew Stefan Grocholski (1890 – 1943, also unmarried) became the last heir of Hryców. Hence the extinction of the Hryców line of the Grocholski princes.

At the site where the Zbaraskis’ castle once stood, Michał Grocholski launched the construction of a new, grand residence. Its design, regrettably unsigned, is preserved in the old collections of King Stanisław August, currently held at the Cabinet of Prints of Warsaw University. According to the design, executed only in part, the main body of the palace was to be connected by roofed galleries to two side pavilions. But neither the pavilions, nor consequently the galleries were ever built. The palace as such was ultimately completed, albeit in a somewhat simplied form. The reason might have been the founder’s death, he ran out of time to finish the palace. Finally in 1782 it was accomplished by his son Marcin, who nevertheless resigned from adding some details.

According to the design, the two-storey main body of the palace was built in a rectangular plan and provided with a high, smooth mansard roof. Its frontal façade was accentuated in its axis by a somewhat elevated, strongly highlighted break in the wall, with rusticated corners cut and separated by vertical trims. In the lower part, the break was provided with rectangular doors and windows, also located in corners. The upper storey received only five high French windows, complete in semicircular shape. The wall break, crowned by a wide profiled cornice, was completed with a low parapet wall. The middle of the Polish parapet was crowned with a large, richly decorated low relief, depicting two cartouches against the background of plant twigs, featuring coats of arms of the Syrokomla Grocholskis and Korczak Chołoniewskis, and a nine-rod count’s crown. Also, two stone vases were added to the edges of the wall. The wall break was covered by a broken mansard roof separated from the body of the palace, also featuring a vase at the top.

The design, in addition to a more sophisticated framing of French windows and the frieze below the crowning cornice, also provided for the presence of a portico in front of the wall break, composed of small thin columns situated in eight pairs, supporting the balcony surrounded by a banister railing, again with four stone vases. The balcony was meant to encompass three French windows. However, neither the drawing by Orda made about 1870, nor posterior photographic documentation, do not include the portico. It is nonetheless mentioned by J. Karwicki in his description of the palace done in the late 19th century, presenting it as built “in Rococo style, ornamented with a splendid columned forecourt”. His words thus indicate that the portico actually did exist, but for some reasons was demolished, probably as soon as in the early 19th century. The wall break that is only slightly sticking out of the façade, also covered the middle part of the garden side of the palace. Its both corners were rusticated, three rectangular lower French windows to the low terrace, plus three upper, in semicircular shape, leading to the balcony with balustrade of wrought iron. The garden wall break was also crowned by a parapet wall decorated with vases. The side sections of both longer façades, with rusticated corners as in case of breaks, were provided with a relatively modest decor. Instead of those much more ornamental of the design, windows and doors were given smooth frames. Only the windows of the lower storey, comprising most of representation rooms, thus higher than the upper storey, were crowned by horizontal nasiółkami (nasiółki). Both storeys were separated from each other by a narrow trim. All façades were completed with a profiled cornice. 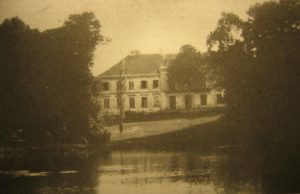 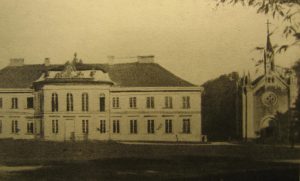 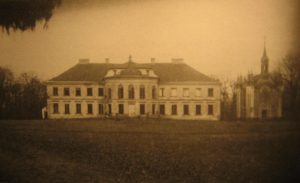 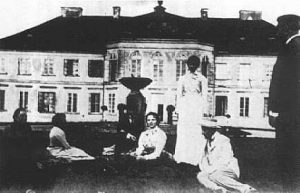 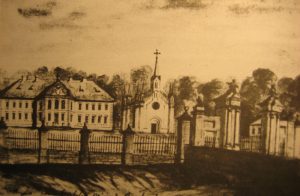 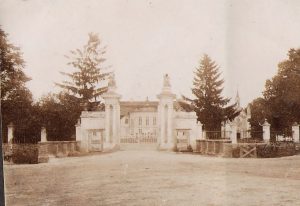 Historical records on interiors, both on their architecture and furnishings, unfortunately are very scarce and superficial. Hence what we do know, is that a spatial entrance hall, with two-armed, sculptured stairs of oak, leading to the first floor, were adorned with portraits of Polish kings, painted on plaster in fresco technique. The ground floor also comprised several representation rooms, a library and dining room, covered with panelling. All representation premises were adorned with overdoors and mouldings. Floors were laid down in patterns of oak woodblocks. Apart from stoves, several rooms also had fireplaces. The grand ballroom on the first floor was especially richly ornamented with mouldings. It featured a huge cristal chandelier, hanging down from the ceiling. Historical furniture, mainly made of mahogany, was probably manufactured at the site. Among collections of historical and cultural value the library ranked high, with mainly heraldic and historical resources, complemented by a family archive, a gallery of Polish and foreign paintings, porcelain with a collection of figurines, cristals and old silver items. Large amounts of old silver were walled in by the owners during the 1st World War, in one of the palace’s basements. It was accidentally found only several decades later.

At a small distance from the palace at its right side, Ludwik Grocholski erected in the mid-19th century a neo-Gothic home chapel, designed by count Konstanty Broel – Plater. It had a quadrilateral plan, with height corresponding to the palace. Small towers crowned with double ogival domes were added to all corners of the chapel. The tower with signature and cross was located on the axis, to crown the façade.

Interior was adorned i.a. by a sculpture from white marble, situated in the main altar and carved by Oskar Sosnowski, depicting the Immaculate Conception of the Blessed Virgin Mary.

In front of the palace, at the other side of the very extensive treeless courtyard, there was an ashlar entrance gate, composed of two several-metre long pillars and two lower small walls, with rectangular holes for gates. Both pillars, from the external as well as from the internal sides, were ornamented with pairs of columns. Also, both were completed with wide cornices, featuring figural sculptures based on plinths. From side of forecourt, the courtyard was encircled by boards fixed into walled, plastered quadriangular poles with stone spheres on their tops. The gate was entered by a bridge across a ditch, trace of former fortifications of the small castle.

A park of a dozen or so hectares with a diverse tree cover, covered mainly the area at the sides and rear of the palace, where the gradually falling terrain reached to a pond, created by the area overflown by the Chomor river. The Hryców garden had a landscape character.